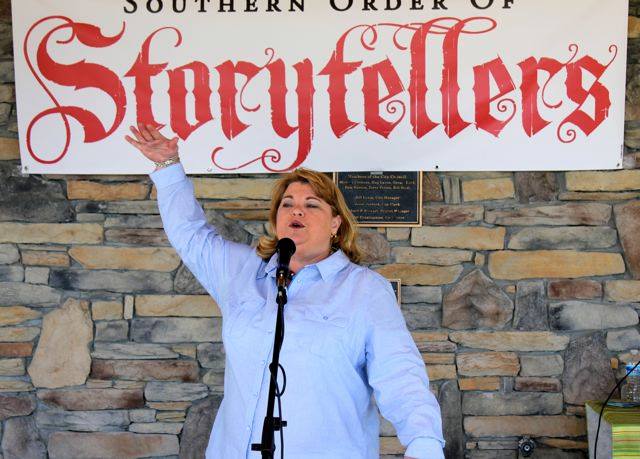 We are a group of storytellers and listeners whose goal is to bring storytelling to wider audiences and help make storytelling once again an integral part of culture and entertainment.

2019 Board of Directors
Bylaws

~How did it all get started?

It wasn’t planned.  But the beginning was probably about 1980, when I first discovered Callanwolde Fine Arts Center.  I’d heard of it, but knew nothing about what it did, how it functioned, etc.  I’d drive by it on Briarcliff Road, and it was intimidating!  This big, gorgeous mansion set way back at the end of a winding lane…Whew!
How did I possibly think storytelling would be of interest to anyone there?!?
Then someone–forget who, I think it was a member of a 2-person theatrical team I’d met at an artist showcase in DeKalb County–said, “go talk with them.  We’ve done workshops there.  It’s a good place.”

So I telephoned the person who headed up the classes.  (Yes, there were classes of all sorts ….still are, I’m sure).  And I pitched the idea of a storytelling class with me teaching it.  They liked the idea.  And my classes started in January 1980  (I rhink that year is right.).  We had six or seven or eight in the class, among them some future stalwarts of Southern Order of Storytellers, such as Chuck Larkin (who really needed this class….NOT!), George Goldman (Chuck’s buddy, and the best encourager of new storytellers around), Fiona Page, Betty Ann Wylie, Mary Ann Coleman (a poet from Athens who drove over every week to attend), Another woman named Janeice (juh-NEESE)….very Jewish and delightful, at least two others who I can just see, but can’t recall their names.  WAIT!  Chuck wasn’t registered in the class;  George sort of got him involved unofficially,  We met for six weeks, and as the last time approached, we all agreed we didn’t want to stop meeting. so we unofficially continued for several more weeks, with Callanwolde letting us use the classroom (which was the Library, I think I recall), and not charging any more…and not paying me any more, either.

If it sounds like it was a success, it was.  Things rocked along  with nothing much happening until we scheduled a second series of classes…forget exactly when they started.  But in that class were some folks who also became active later in S.O.S.,  B.J. Abraham, Susan Deaver, John Rice for three.  In between we’d had some get togethers, like picnics and socials, and accumulated more interested folks.  Then in January 1982 we planned a gathering at my home in Lilburn IN JANUARY, with a pot-luck supper.  It was the day of the first ICE STORM to hit Atlanta in awhile.  And I lived in Lilburn. For folks inside the beltway, that was like driving to Hartwell!  But folks came.  One story I remember that Betty Ann and her husband Wylie told, was about their car.  It was an ancient Mercedes.  They live–still do–live in the West Paces Ferry area, and they drove all the way to Lilburn in sub-freezing temperatures in that car WITH NO HEATER!  They kept warm with the crockpot that had their contribution to the pot-luck.  Going home was not so great!  No hot crock-pot!

By Summer 1982, we planned a really fine day-long event at Callanwolde, inviting folks that we’d been told would be interested in storytelling.  I think we had about 25 attend.  This included workshops, lunch, and some performances by various participants.  In that bunch of folks were–as I recall–Jane Saliers and Rosemary Glenn, and George Goldman and others of the classes we’d had at Callanwolde.

Also that Summer, we had what was the organizations meeting that became Southern Order of Storytellers at the “Cup and Chaucer,” the deli on the upstairs balcony of Oxford Book Store in Peachtree Battle.  There must have been about 12 or 15 attending.  The “usuals” were there:  George Goldman, Betty Ann Wylie, Fiytona Page, Chuck Larkin, me, Barbara Goltz (a new participant who was already a professional pupeteer) Diana Solomon (on staff at Oxford Bookstore) Radine Bergen (one of the new good-idea people who’d come along), Betty Miles (part of the Oxford Book Store “family”), B.J. Abraham, Susan Deaver (I think), and probably John and T Rice, as well as some others.  It was a hot Sunday afternoon, and even with the air conditioning going full-tilt, because we were upstairs, things were pretty warm

We all knew this was going to be a new organization, so the first thing we needed was a name.  Okay, we decided the word “Storytelling” or “Storytellers” had to be part of the name.  But “Storytellers….what?  or “What….”storytellers…?”  Well, we were in Georgia, so how about if we used “Georgia” as part of the organization name?  Okay, so here’s “Georgia….Storytelling (or Storytellers).  How about “Georgia Association of Storytellers”?
Hey, that sounded fine!  What about the initials?  G.A.S.  Hmmm…  Maybe not.

Back to the drawing board.  Okay, so we maybe should start with the initials.  Well, for sure “S” would be one, for storytelling….or storyteller(s).  Which?  we chose “storytellers” because that was to be a group of us, and we were–or intended to be–STORYTELLERS  Fine..  Now we had one word to go with one letter:  STORYTELLERS.

But what about….STORYTELLERS?  Well, we were in the South….and we might eventually be bigger than just Georgia, so let’s say so:  SOUTHERN!  Yep!

Okay, SOUTHERN STORYTELLERS?  It still needed something.  And we were still working with initials.  Hmm…what about S.O.S.?  Perfect, we all decided.  But what would the “O” stand for?  “Organization” sounded something like a business organization, so that wasn’t what we wanted.  Someone suggested “Order”….sort of like, I guess, a religious order, or the “Order of the Garter” with knighthood, or some such.  Unanimous!  So we became….just like that….”Southern Order of Storytellers.”  We also liked the symbolism of what the initials represented:  S.O.S.  Help!  We could interpret that two ways:  one, we NEEDED help!  and two, we wanted to BE HELPFUL.

So that hot August afternoon in 1982 we launched this entity that still lives on….for nearly 38 years.  That’s nearly half of my life.  I’ll be 77 on January 17, so do the math.  This brotherhood/sisterhood–partnership has lasted longer than some countries.